I spent the last week on a road trip from Virginia to Texas and back. I didn't get a lot of reading done but I listened to five books on Audible.  Their reviews are below.

I listened to Echo as an audible book, it was wonderful. It is the story of the journey of a magical harmonica that gives courage to who ever plays it and the wisdom to know when to pass it on. Each part of the book focuses on a different owner. In the end how the harmonica has journeyed from one to the other is told and all the stories are brought together in one final performance. The audible version included a great deal of music and was quite lovely.

The Wife Between Us By Greer Hendricks and Sarah Pekkanen

This is not typical middle grade reading. It is a very complicated love and revenge triangle in which each of the three adults, one man and two women, are a little unhinged, vengeful and manipulating. It is also made complex by numerous flashbacks, often to scenes that have been visited before but now are seen from a different angle.

The Thing about Jellyfish by Ali Benjamin

First you need to know, if you read this book you are going to learn a lot about Jellyfish, a lot. Suzy’s parents describe her as a constant talking person, but when her estranged best friend drowns she goes silent, not a word. Yet in a wonderful way the style of writing is as if she is constant talking to the reader and also to her deceased friend. Large parts of the narrative are actually in second person as she addresses the friend.  Inspired by a group of three young teens who actually flew from Florida to Tennessee on their own, in an attempt to visit Dollywood, Suzy  manages to buy a plane ticket to Australia to speak to a world renowned Jellyologist. Will she make it? At its heart this is a story about the true pain of middle school when the paths of two friends diverge.

Everything, Everything by Nicola Yoon

Madelaine is allergic to the world and her mother has built for her a safe house in which she has lived for 17 years protected from the world outside and quite content. When a funny attractive boy moves next door she wants more.  She is finally faced with choosing whether she wants to live safe in her bubble or die outside living the fullness of life. If you find yourself suspecting that mom has more than Madelaine’s health as an agenda pay attention.

Michael Vey: The Prisoner of Cell 25 by Richard Paul Evans

If you had a special ability, who would you tell? Would you tell your parents you could read minds? Would you tell your best friend you could shock the living daylights out of him? That is the beginning of this story. The middle of the story is the discovery that others, only a few others also have powers. And then the challenge is how to use those powers for good when others want to use them for evil. This is the first in a series of seven books. At time the story was very intense but at other time I thought it a little slow. I probably will not come back to this series.
Posted by by-stuart at 12:39 PM

Mom, Dad I Killed a Man 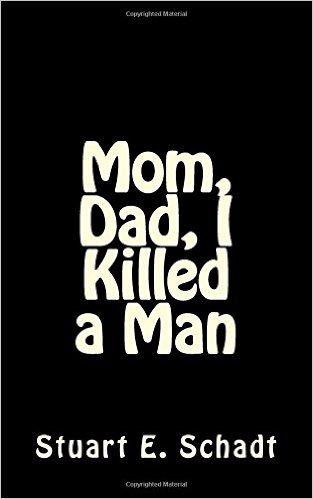