The Power of Blotch 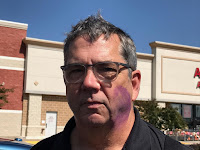 I am working on a series of books about a boy called Blotch. He has a port wine colored birthmark on the side of his face. To get a feel for the experience I used face paint to put a birthmark on my face. It rather realistically looked like a birthmark or a bruise.

I realize I am sixty-two and my character is fifteen and that how people treat us, in general, is totally different but I think it was an important experience. Some people stared but tried not to and no one was overtly rude.

I did find I was at first self-conscious. When I moved past that I realized I could turn blotch into a positive. People would look at me a little longer. I would take this as an opportunity to smile and say hello. Or how's your day. One of my friends in men's group said this is natural for me because I'm from Texas and people there acknowledge each other as they pass. He said he spent a semester at Texas A & M and on campus, you are supposed to say hello or 'Howdy' to everyone you pass. He found it exhausting.

Overall I found for my character an arc that went from self-conscious to empowered.
Posted by by-stuart at 2:44 PM