The subject of boys and boxes came up at a writers group last week so I thought I would spend some time on boxes. In Henry on Fire Henry says he has a box with things important to him and his granddad pulls the missing key to the gates of Altara out of a box of treasures that also includes an old pocket watch for Henry’s brother Larry.

So let me start by sharing my family’s favorite box story it is The Littlest Angel Charles Tazewell (Author), Paul Michich (Illustrator). At 2000 words the Littlest Angel is longer than the average picture book, it is really a short story presented as a picture book.  The story is written in beautiful prose. 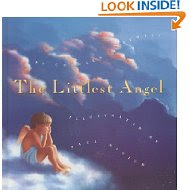 The First line: “Once upon a time — oh many, many years ago as time is calculated by men — but which was only Yesterday in the Celestial Calendar of Heaven — there was, in Paradise, a most miserable, thoroughly unhappy, and utterly dejected cherub who was known throughout Heaven as The Littlest Angel.”

The littlest angel is way too small to enjoy any of the ways of heaven and he is seriously unhappy. The understanding angel asks, “What would make you happy.”  He asks for the box beneath his bed. In the box were:

“Well, there was a butterfly with golden wings, captured one bright summer day on the high hills above Jerusalem, and a sky blue egg from a bird’s nest in the olive tree that stood to shade his mother’s kitchen door. yes, and two white stones, found on a muddy river bank, where he and his friends had played like small brown beavers, and, at the bottom of the box, a limp, tooth-marked leather strap, once worn as a collar by his mongrel dog, who had died as he had lived, in absolute love and infinite devotion.”

Once he has his box his life in heaven flows smoothly. The birth of the child of God is announced and the angels all begin to prepare fabulous gifts, beautiful music, golden harps and the all other types of heavenly gifts. The littlest Angel places his box among the gifts. This is after all his most valuable possession.

When he sits down and sees his box among the beautiful gifts he is devastated by how shabby his box appears and as the hand of God moves over the gifts he knows he has made a terrible mistake.  The voice of God says:

“Of all the gifts of all the angels, I find that this small box pleases Me most. Its contents are of the Earth and of men, and My Son is born to be King of both. These are the things My Son, too, will know and love and cherish and then, regretfully, will leave behind Him when His task is done.”

So treasure your treasures.

Are Cliques Always a Bad Thing?

So my fifteen middle schoolers covered quite an age range. So we let them for the most part settle into their own cliques. These were mostly age related and there was only a little friction. We occasionally shuffled them asking the older kids to provide some leadership for the younger ones. We also succeeded at having an identity as a whole.

So it raises the question whether cliques are always a bad thing? Cliques provide a sense of safety and security at this age. That doesn’t seem like a bad thing. The truth is everyone has insecurities and is looking for affirmation from others.

So writing and cliques.

In Henry on Fire, Henry and his friends see themselves at the bottom of the school social ladder and therefore would never see themselves as a clique. Yet they are. By the end of the book they add two friends but before book two begins those friends have moved away. In book two Henry wants to shut out of their group a boy he thinks is less cool than they are. Jamal and Fred are more than ready to embrace this new kid, but Henry struggles to get there.

As I have always said Henry is both the protagonist and antagonist in my story.

So I spent a week with 15 middle schoolers and I learned some helpful things about my audience. Our group included children who just graduated 5th grade and children graduating 8th grade. Wow there is a difference. On one day we went and cleaned the training facility of Blue Ridge Assistance Dogs. We swept, vacuumed and washed away dog hair as well as cleaning up the outside yard. 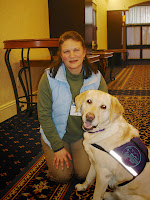 As I was already aware, some jobs are preferable to other jobs and no job is preferable forever. Many of these kids had no experience vacuuming, sweeping or doing other household tasks. The tasks they most clearly understood they were best at and the older they were the better they were at their tasks. Two of the older girls very thoroughly cleaned the cat cage. They have a cat at the facility so the dogs will be acclimated to cats and not go chasing them.

So my first learning is my characters are going to start doing age appropriate chores, though Henry is quite vocal that he hates chores. Maybe at some point he will grow up enough to accept the responsibility of chores. The second learning was that I write about 7th and 8th graders primarily for a 4th through 6th grade audience. So for me this means that my characters are dealing with the experiences of 7th and 8th grade, but sharing them in ways appropriate for 4th – 6th graders.

One clear example of this is in language. This was made quite clear to me when a soon to be 6th grader very quietly and innocently came up to me to tell me one of the soon to be 9th graders was using the f word rather freely. I pulled the guilty party aside and said I heard he had been dropping the f-bomb and I didn't mean fart. I told him I didn't like the word but also explained the difference between what he says in front of his friends and what he says in front of the younger kids.

In real life 7th and 8th graders are experimenting with such language as they seek to appear tough or mature, neither of which is accomplished through the use of the f-word. I think if I did include such language I would have one of the other characters tell the offending character that it just made him look like a little kid trying to sound tough.
Posted by by-stuart at 9:52 AM No comments:

Last week I missed my Blog day totally. That was the first time I had missed since I started weekly blogs last winter. I was spending the week with 15 middle schoolers in a program we called Making it Better. On Day one of our adventure we were out to make ourselves better at the Bull Run Mountain Conservancy located in the northwest end of Prince William County. 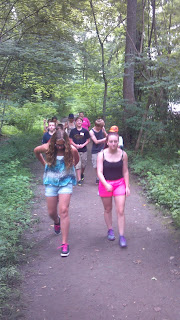 The conservancy preserves 800 acres of the Bull Run Mountains. There are numerous trails to hike and more things to see. The conservancy offers day camps in the summer, classes during the school year and a whole host of other activities. You can find out more at www.brmconservancy.org.

We chose the Fern Hollow trail for the first part of our hike. This took us by the remains of the Beverly Mill.  The mill is a three story stone structure that can be easily seen from I 66 just east of Thoroughfare Gap.  The Mill was opened by the Chapman family in 1742 and operated up until the Civil War. During the Civil War the Confederates used the mill as a slaughterhouse and meat preservation facility. Prior to the Second Battle of Manassas the confederates burned the mill to prevent the meat from falling into the stomachs of the union. The Beverley Family rebuilt the mill 1876. Up until a fire in 1998 there was hope of restoring the mill. After the fire the building was stabilized and is now maintained as an historical ruin site. 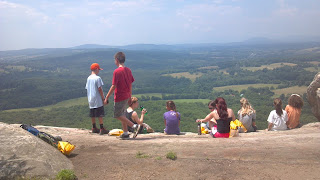 Our next interesting point was a deer exclusion zone set up in the spring of 2012. The goal is to see what the forest would look like without deer. The deer eat much of the low new growth in a forest and greatly affect the natural development or do they? We can check back in a few years and see.

We shortly thereafter joined the Chestnut Ridge Trail which took us up to the overlook. The most interesting thing about the overlook is I realized we were standing on the white cliff outcropping that can be seen when you are eastbound on I 66 just east of the Plains.