So here is a developing idea. 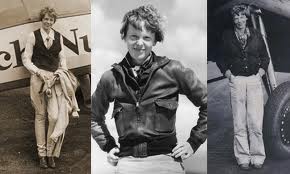 Today the FBI is searching for Jimmy Hoffa’s Body in a field outside Detroit. And then there is the group who wants to raise several million dollars to see if they have really located Amelia Earhart’s plane below the reef off Nikumaroro Island. Are these mysteries really so powerful that we will spend millions of dollars of public money, in the case of Jimmy Hoffa and millions of private dollars in the case of Amelia’s plane. You did contribute to the Hoffa search, would you contribute to the search for Amelia’s plane?

I’m imagining a character obsessed with Amelia’s flight. He starts when assigned to do a report on milestones in flight. One friend does the Wright Brothers another does Yuri Gagarin, the first man in space, but when the report is over the friends move on with their lives but not our character.

Maybe the Arc of the story could run from June 1 to July 2, the time frame of Earhart’s final flight. So then is this a main character or is it a quirky side character? Maybe he starts to wear his hair like Amelia and to dress like her. She was often photographed in trousers and her hair was on the short side. Maybe on July 2 he is nowhere to be found and his friends believe he has disappeared.

Love to hear if anyone has any twists they think might be added to the story or character.

As for me I’ll think about this for a year or so and see where it goes.
Posted by by-stuart at 1:40 PM