Its About Dead People: Part One

Those of you, who know me, know I have a love of megalithic stone structures. The oldest of these are found in Turkey and throughout Europe. Many are tomb structures but they also include Stonehenge, other stone circles and singular stones. In Europe this megalithic construction is found from 5000 BC until about 1200 BC. (Surprisingly it continues on some Pacific Ocean islands until the 19th century when it is interrupted by the European invasion of the world.) Interestingly the literature draws no connection between megalithic architecture and pyramid construction. They seem to me to be both drawn out of the human quest to see, ‘how big can I make it.’ That quest still goes on...


How tall a building can I build?


How big a company can I make?


How long a limousine can still make it through the drive-through?


How big a car can still fit in the garage? 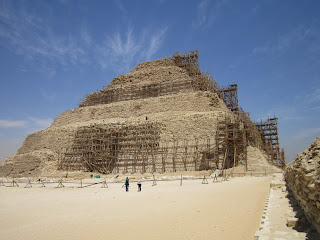 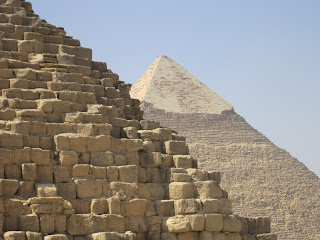 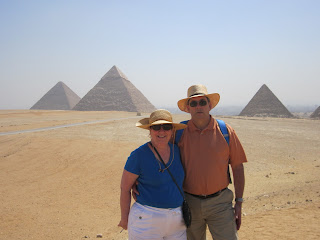 Knowing all that, you can imagine how excited I was to see the pyramids and my first, the step pyramid at Saqqara was not a disappointment. The Egyptians had a culture of honoring the dead, especially the Pharaoh and other elites. All the tombs of Egypt were located west of the Nile in the belief that the dead followed Ra the Sun god towards the sunset. Prior to the pyramid the dead were housed in a mastaba, a one-story square rectangular building that might house the dead in a chamber or might sit over and hide the entrance to a burial shaft where the dead were placed. Though mainly for one person, if children predecease their parents they are often found in the tombs. Imhotep in service of King Djoser changes the tomb business. You may remember Imhotep in the title role of the mummy movies.


He starts by building a mastaba for King Djoser. He then built a second mastaba on top of the first. He then expands the base and start building one, on top of another until he has a six step pyramid. This is the first large stone building on Earth. (c. 2620 bc) Stonehenge is dated to somewhere between 2400 – 2200 bc.


The great thing about Djoser’s pyramid at Saqqara is that you approach through a colonnade building. From the colonnade you exit out into bright sunlight in a large walled court. The walls block your view of the surrounding landscape so all you see is the pyramid against the sky.


The next few attempts at great pyramid building run into a few problems. First they try to make the sides to steep. So at one point they change the angle to move more quickly to a peak. It is speculated that there may have been indications of structural problems because the weight was so focused on the center. Based on its appearance it is called the Bent Pyramid. There is also the tower pyramid at Mediom and then there is the red pyramid whose slope is a bit gentle. So that even though it is a massive structure it just doesn't have the same impact resulting in Pyramid regret.


In the three great pyramids at Giza they finally get the angle right for structural and aesthetic purposes. It also seems that at Giza we finally get over the pyramid envy issue. That's the competition that each pyramid needs to be larger than the one before. The largest pyramid belongs to Cheops. His son builds a smaller pyramid and his grandson an even smaller one. (Yet still pretty massive.) There are nine smaller pyramids at Giza for the wives. The pyramids of Giza are amazing.


1. There is no evidence the pyramids were built by slaves. In fact the party line is that they were public works project provided to give money to the people during the rainy season when they could not farm. (Also remember the Hebrews of the Exodus were not doing stone work, in spite of what you saw in the movie, they were making bricks of mud and straw.)


2. There is only one person buried in each pyramid. Except in the case of the children. Masses of servants and slaves were not killed in order to serve the Pharaoh in the afterlife or to prevent them telling where the entrance was. In fact the entrance of all but one pyramid is on the north face of the pyramid. (The good news is that the servants and slaves are not there to rise up and follow the mummy into a battle for the soul of the Earth.)


Though there are a few newer pyramids in Egypt. The pyramid was replaced by entombment in the Valley of the Kings beginning in the 16th century BC.


What is striking is that the Egyptians had a concept of afterlife. They believed that the Pharaoh and others went on living. Those who served with him in his court and society built tombs near his pyramid so that they could share in the Pharaoh's afterlife. Egyptians saw at least part of the afterlife as a harmonious continuation of our current style of existence. Many of us still do the same with our image of heaven, wanting to know that we will see our love ones and our pets when we arrive in the presence of God. Human expectations don't change much over time.
Posted by by-stuart at 11:35 AM