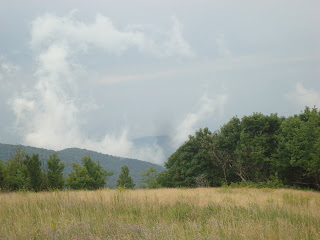 Cow Camp Shelter to Seeley Woodworth Shelter
We leave camp about 8:30 the next morning. Our boots are damp but our socks are fresh and dry. This matters because of the risk of blisters. Today’s hike will take us up over Cold Mountain (Not the one in the book.) and through Hog Camp Gap and Tar Jacket Ridge. We begin with a 700 ft climb to the summit of Cold Mountain. The summit of Cold Mountain along with Hog Camp Gap and Tar Jacket ridge are one of the few places along the trail in Virginia that are mowed several time a year in order to maintain the pasture look they had at the time the trail first crossed them. In reality most of this area had been fully cleared by 1900 and the forest we currently see is new growth. It’s great to walk in the open and it means there is an abundance of black berries along the trail to provide second breakfast and then even a snack after lunch. I eat my berries as I pick them but Bo has this obnoxious habit of filling his hand with berries and walking on. It is called differed gratification. As he walks in front of me eating his berries I consider tripping him with my walking stick so I can take his berries but I manage to restrain myself. This area is called Hog Camp Gap because they used to bring the hogs up here in the early fall so they could fatten up on acorns and chestnuts. 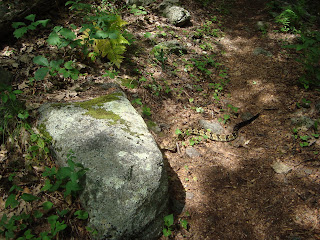 There are lots of birds, butterflies and wild flowers in the meadows as well as a great breeze. We also cross the remnants of a stone wall several times. The guide book reports that this wall is a total of 12 miles long which indicates its owner and builder was probably a significant land owner. It is unclear exactly when in the early to mid 1800’s it was built.
This is the day of this year’s greatest adventure. About mid afternoon we come across a family of four out on a day hike, parents and two teenagers. They are paused for a rest when we come on them and we stop and exchange a few pleasantries before going on. I am in the lead at this point and we have moved back into the woods. I am brought up short by a snake sunning itself in the middle of the path. I stop about three feet from it. Bo comes up and immediately says it’s a rattler. Both its pattern and tail indicate so. I ask Bo if he will lay down beside it so you can have a perspective of its size. He refuses. I then suggest he stand by it with his shoe next to it. He won't do this either he is very uncooperative. (I estimate the snake is three to four feet long but we will never, know will we.)
We back off and Bo decides that if he rolls some rocks near it, it might decide to leave. After about five throws that land very near the snake but don’t hit it he gives up. At this point the family catches up to us. The mother who apparently usually takes the lead swears she would not have seen it and that we saved her life. (Isn’t that nice.) I decide to take a long branch and nudge it from the trail. I very gently point its head up hill and off the trail. Mr. Snake takes great offense to this suggestion and winds himself up into strike position and starts shaking away at his rattler. We withdraw and decide to leave him with the trail and we make a 25 foot arc off the trail into the woods.
Later Bo reads from our Appalachian Trail map rules that we are not to bother the wild life. I contend that Bo throwing rocks at is far more bothersome that me just nudging it with a stick. To prove my point throw some things at the person next to you at work. Then just nudge somebody at work with a stick. Let us know who take the greater offense.
We take our afternoon break at this amazing tree that has grown on top of this rock. 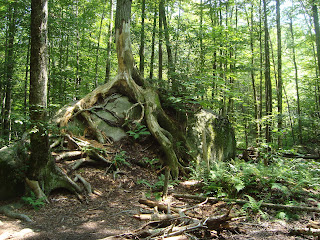 Our hike today is just over seven miles and we arrive at the Seeley Woodworth shelter at 5 pm. This shelter area is great because it is very open allowing for more breeze and dryer air. We have made it through the day without blisters. We are alone in the camp tonight.
Posted by by-stuart at 7:30 AM